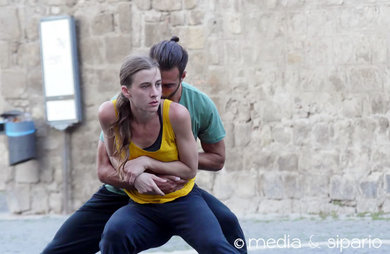 Four pieces that investigate on the relationship between the body and the element water.

Water flowing, water splashing against the rocks, water crossing the space and outlining the geography of human existence. Water as a primordial element, water as the source of life.

“Alle acque” highlights a consideration: man is not above nature, but just a part of the whole. Man can use science to extend his knowledge and to develop his skills, but we also know that science and development can be manipulated by dark forces.

If you observe the relationship of different civilizations and cultures with water, it seems that to a lower level of “civil and social development” in a population corresponds a higher respect for water.
A Sioux saying goes “the frog does not drink up the pond in which it lives”, maybe because the frog knows that it wouldn’t have anything left to live on.

The performance requires twenty plastic bottles on stage: they will be used to define the scenic space and to produce sounds. The use of this common object, the emblem of consumerism, allows to carry water and therefore to open a breach and to clear the way for art.
The element water, the sounds and choreographies create a magical setting, landing into a captivating apotheosis of bodies looking for a relationship with their own self.

This project consists of four different chapters, taking place in different moments. The possible location can be a museum, a square, a hidden street in a city’s historical centre, a train station…
An organic site-specific performance, combining art, literature, live music and dance.


“The pied piper of Hamelin”

The pied piper of Hamelin from the tale changes instrument: the charming and magical sound is replaced by the rhythmic hits of the plastic bottle, by the sinuous movements crossing the air, painting ephemeral brush strokes.

The five performers dance, stage choreographies and run on stage following the constant hits of their bottles, supported by the imminent rhythm of the music by Marco Giannoni.

Poems and paintings by the Italian artist Salvator Rosa are the background to this piece, which is focused on the living body and the narrated body, on the syntony between mind and body.
The two dancers represent the young girls Porzia and Lucrezia, memories of fragments from the satirical poetry. The strength of the text contrasts and at the same time highlights the delicacy of the female body.

This performance takes on stage some of the poems that talk about the symbolic water-woman-night sphere, starting off with the story of how Ulysses is hit by a storm and saved by the White Goddess. The contact with water and the intimacy with the female body are part of the same experience, approached in two different ways: enjoying contact with the element and enjoying the conquest of the woman, or being unable to establish such a contact.

A story of bodies, an alternation of choreographies, fragments of text and paintings, from crucifixion to the last supper, aiming to investigate the relationship between men and divinities.
A performance that adapts to the space it lives in , a performance that involves its own audience trying to stop their gaze and thought.
Living body and immortal body, to imagine and to raise to oneself the most hidden questions. The biggest victory of art is when it allows us to go back to thinking, when it allows everything and the contrary of everything.
Direction and choreography Loredana Parrella
Performers Yoris Petrillo, Elisa Melis, Luca Zanni, Maeva Curco Llovera, Gianluca Formica
Written by Loredana Parrella, Yoris Petrillo
Music Various Authors